Wind and air are omnipresent and contain almost all building blocks: energy, oxygen, nitrogen, carbon and hydrogen that you will find in many contemporary products. Think of all plastics, but also medicines, proteins and food are mainly made up of the elements C, H, O and N.

Carbon and hydrogen are traditionally mainly obtained from fossil fuels, as is the energy needed for chemical conversion into useful products. This releases a lot of CO2, with all the negative consequences that entails.

If we turn the elements, which are already naturally in air, into usable products by using wind or solar energy for the chemical conversion, we not only obtain a clean, but also a virtually inexhaustible source of products and energy. With this idea, many parties, including TNO and MTSA Technopower, are developing new technology to make this happen.

MTSA Technopower is specialized in scaling up innovations of its customers towards the next TRL in the field of Cleantech, clean technology that enables sustainable production processes.

For example on the basis of fermentation, where chemical conversion takes place biologically in living cells. Another method is the application of electrochemistry. Electrochemistry uses a membrane over which an electrical voltage is applied. Under the influence of that voltage, some of the molecules change into ions, of which hydrogen ions (loose protons) are able to pass through the membrane. On the other side of the membrane, those protons react with elements, ions or molecules present there, such as other protons or CO2. In one case hydrogen is formed, in the other formic acid. Formic acid is a liquid and an important building block in chemistry, from which many other products can be made.

With the right electrochemical cells, stacks and installations, formic acid can be produced on a large scale. As a CO2 source, flue gases from traditional incineration plants can be used, for example from waste plants. The CO2 emissions from these incineration plants will then decrease and is converted into products using clean electricity. This is also known as CCU (Carbon Capture and Usage). In a subsequent development step, the CO2 can be extracted directly from the air instead of flue gases. 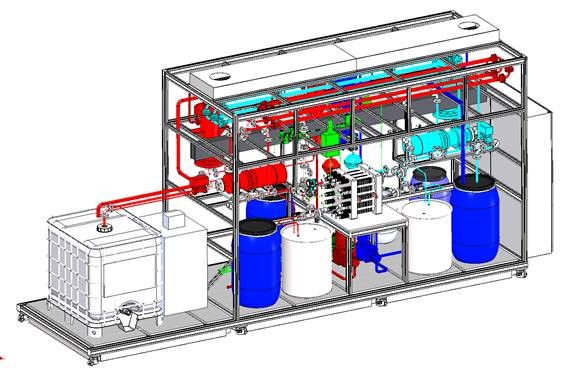