The GROHW collective has been awarded a second subsidy via the OP Oost programme (REACT-EU), making a demonstration of the complete hydrogen system possible. With this contribution to promoting sustainability on a local scale, the collaboration between local companies and institutions continues to collectively employ its forces to accelerate the energy transition.

In phase two of GROHW, the collaboration will demonstrate the insights and results from phase one in various test set-ups. The demonstration has two objectives. The first is to offer a practical demonstration of a (decentralised) 50-kW hydrogen system over the entire chain: from green electricity production to sale of the hydrogen and heat produced. The second objective concerns the practical application of a certified field test unit of highly energy-efficient adsorption heat pumps fired by (natural) gas (TRL8). In connection with the first objective, these will run partly on hydrogen in the test set-up. 20 to 30 heat pumps will be built and tested in homes in the Eastern Netherlands.

Deventer as pilot site
The city of Deventer is the pilot site for the hydrogen system. The components will first be tested in a safe environment and assembled into a complete system in Arnhem. They will then be put together to create a green hydrogen system in Deventer for the purpose of the demonstration. This green hydrogen system will consists of solar panels connected to an electrolyser. The electrolyser converts the green energy into green hydrogen, oxygen and heat, with the hydrogen being stored as an energy buffer. During the winter, the gas-fired adsorption heat pump will supply efficiently-generated heat to an office on the site of De Gasfabriek. As part of an initial pilot, hydrogen will be supplied in the summer months via a hydrogen burner at AsfaltNU in Deventer. The award of the subsidy is an acknowledgement of the progress achieved so far, with the first efforts for phase two already underway.

Accelerating the energy transition with GROHW
In connection with the Regional Energy Strategies (RES) and local sustainability ambitions, hundreds of wind turbines and thousands of hectares of solar panels will need to be installed and commissioned in the Eastern Netherlands within the foreseeable future. At the same time, regional grid operators indicate that the electricity grid is currently (almost) at its maximum transport capacity (grid congestion). As a result, in the Eastern Netherlands over the coming years a significant need for local energy storage systems, also known as ‘energy buffers’, will exist. Hydrogen can provide this buffer. The GROHW project (Green Oxygen, Hydrogen and Waste heat) has been running in Deventer since the beginning of 2020, creating a digital blueprint for using hydrogen as a local energy buffer. GROHW’s ambition is to design and develop a decentralised, megawatt-scale green hydrogen system that helps accelerate the energy transition by reducing grid congestion. All partners in GROWH originate from the Eastern Netherlands and are proud of the local, regional character of the project. By participating, they have committed to accelerating the energy transition.

Working together to accelerate change
The contributing parties are all innovators in their industries and are sharing their knowledge and experience within this project. They feel a responsibility to lead the way through exploration and experimentation. During both phase one and two, the collaboration has consisted of a diverse composition of participants – namely: 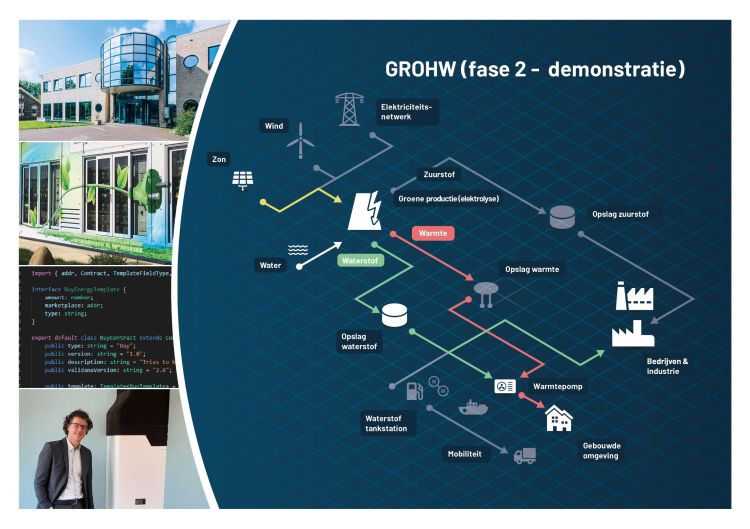